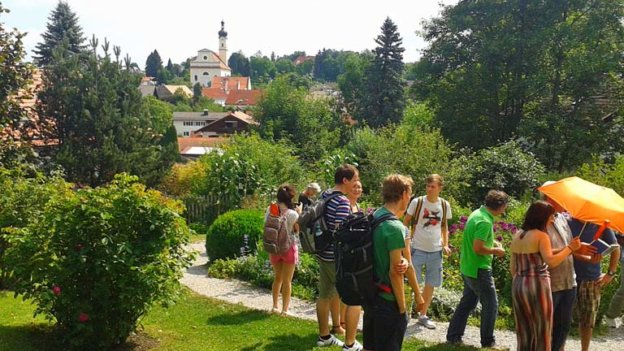 The RG Munich goes on a day-trip to Murnau, a small pretty town south of Munich in the midst of a huge marshlands and with a fantastic view of the alps.

In 1908 the two artist couples Gabriele Muenter/Wassily Kandinsky and Marianne von Werefkin/Alexej Jawlensky first came to Murnau. The pictures they painted at and of this place and its surrounding landscape until 1914 have brought Murnau to the attention of an international audience.

We will get a guided tour in English of a major cultural attraction, the Münter-Haus, which Gabriele Münter bought in 1909 and where she lived with fellow painter Kandinsky; it was a meeting-point for the avant-garde and played a crucial role in the development of the ‘Blauer Reiter’ group of artists. The house and garden have been restored to their original state, with decorations by Kandinsky, glass paintings a. o. still existing. The Münter-Haus is now a museum affiliated with the Munich Lenbachhaus. http://www.muenter-stiftung.de/de/das-munter-haus-2/

Depending on the weather, we will go on a stroll through Murnau after thr visit to the Münter House and/or walk down to nearby lake Staffelsee. There are many possibilities to spend time there pleasantly: minigolfing by the lake, going for a swim, renting a SUP, row- or pedal-boat.

In bad weather – the trip will happen in any weather! – it is also possible to visit the Schlossmuseum, https://schlossmuseum-murnau.de/, which provides more info about Münter, the Blauer Reiter, and author Ödön von Horvath.