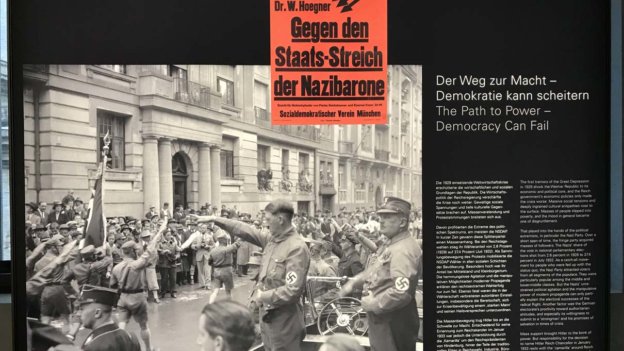 The Munich Documentation Centre for the History of National Socialism is located at the edge of Königsplatz on the site of the former ‚Brown House’, once the headquarters of the National Socialist German Workers’ Party NSDAP. We get three parallel tours for five people each, two in English and one in German.  Specialist historians will take us around the Centre‘s permanent exhibition which documents the history of National Socialism in Munich, the city’s special role in the Nazi system of terror, and Munich’s difficulties in confronting its past after 1945.

As the place where the NSDAP was founded 100 years ago, Munich is associated more than any other German city with the rise of National Socialism. The former ‚Capital of the Movement’ played a pioneering role in the establishment of the Nazi regime of terror and was home to the Nazi party apparatus.

Thanks to DAAD scholarship holder Julia Stankiewicz, the DAAD logo has been circling the earth since the end of 2020. As a master's student in aerospace engineering at the Technical University Munich, she originally planned an internship at Planet headquarters in San Francisco.