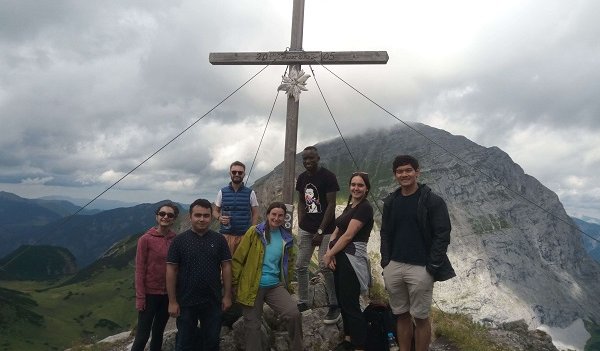 In July the RG Munich made an extended hike over the following stations Eng – Binsalm – Binssattel – Hahnenkampl.

We met punctually at 08.45 am at the Munich main train station. From there we took the train in the direction of Lenggries, from where we took the bus along the Isar river, the shores of the Sylvensteinsee lake and the Rissbach stream to the final stop Eng. The weather forecast had predicted light rain, but the weather was pleasant and not too hot, the view of the surrounding peaks unclouded.

We climbed first on a trail and then a road to the Binsalm and above this again on a trail towards Binssattel. On the way we made small breaks. From Binssattel we went along the ridge to the summit of Hahnkampl (2080m). The descent was on the same, harmless route. We then took a break at the Binsalm. A wedding was taking place there.

The participants were interested in the dairy products from the local alpine pasture- the course of the water, use, renaturation, geography and botanical features became focus of their interest.

On time we reached the last bus out to Lenggries, where the scholarship holders immediately changed to the train and reached the Munich main station again at shortly before 9 pm.