Excursion of the RG Tübingen to Rottweil 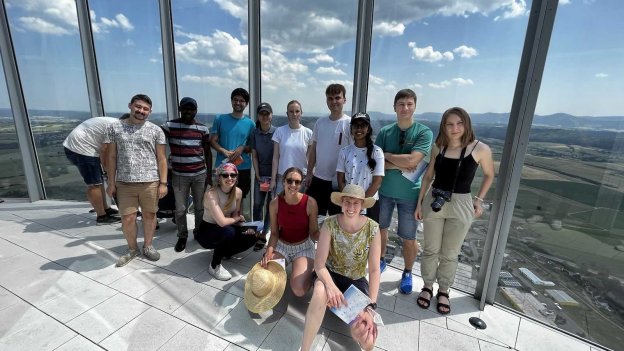 On June 19, 2022, 9 DAAD scholarship holders, 4 friends and an organizer met at 9:15 at Tübingen main station to travel with the 9€ ticket to the oldest city in Baden-Württemberg: Rottweil.

The first item on the program in Rottweil was a hike to the elevator test tower of Thyssen-Krupp, which with its approx. 250m height is visible from far away. We shot up to the elevator platform at 8 m/s and learned that elevators that are significantly faster are tested there. From the platform we enjoyed the view, which unfortunately did not reach the Alps on this day.

Due to the lack of public transport, we then had to walk back to the city for an hour, passing the traces of a completely ingrown castle ruin. At the latest now, the blazing heat of 35°C got to everyone and the subsequent break in the ice cream parlor was more than welcome.

At 14:30 an exciting guided tour of the city was waiting for us, in which we learned that the oldest city refers to an early Roman settlement, which was built at the intersection of two important roads. A very fascinating mosaic of Orpheus has been preserved from this period, which we were able to admire in the city museum. Furthermore, we learned about the regional customs, especially the carnival.

After an intensive and informative program, we started our journey home around 5 pm.