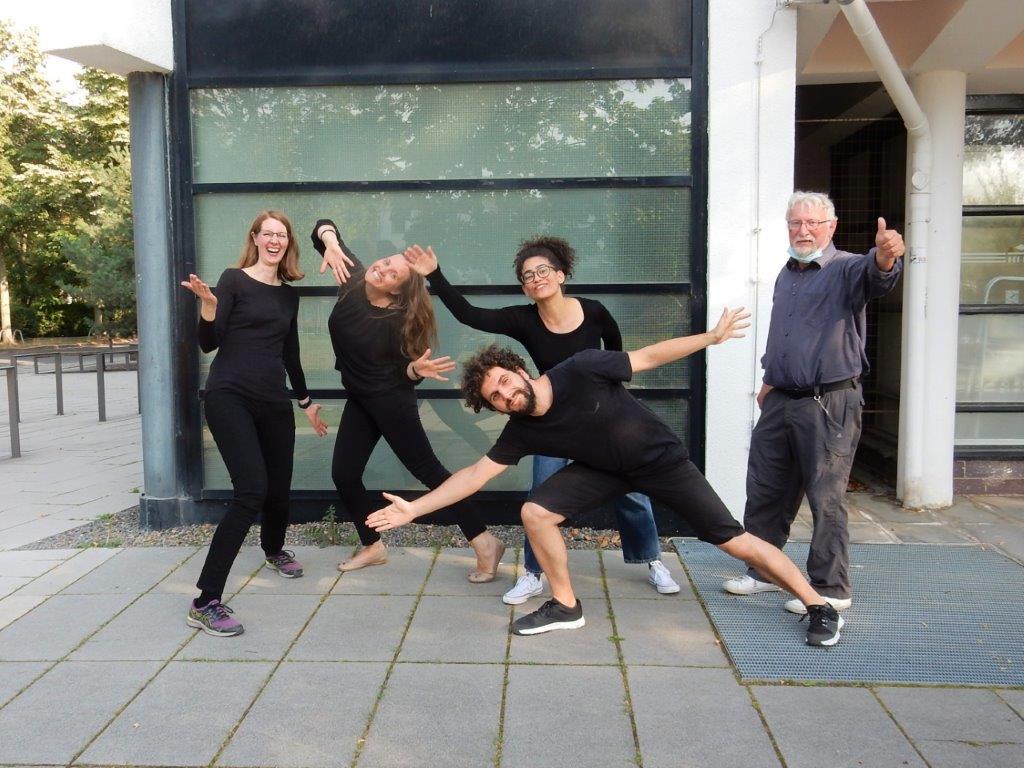 About a year and a half ago we had arranged a workshop for improvisational theatre for about 12 DAAD-students, conducted at ‚Bühnenrausch‘, a small theatre in Prenzlauer Berg that specialises in ‚impro‘. This led to the setting up of a DAAD-Impro-Group. After a number of training sessions we had our first performance in November last year – at the 30th anniversary of the DAAD-Berlin-Stammtisch. Some of you might remember seeing us on stage there.

Well, improvisational theatre is a form of drama/play, in which most or all of what is performed is unplanned and unscripted. Characters, dialogue, plot are all set up spontaneously, often inspired by suggestions from the audience.

Anyway, we had planned a ‚proper‘ production for April, but due to Corona we had to cancel this project. Still, we felt that we should not despair, but we were motivated to appear on stage again – and we got the idea of performing in the open air. Outside the old mensa (now it is the ‚Veggie-Mensa‘)  on the Campus of the Free University we found a suitable location – with some kind of stage and benches for the spectators.

And on Saturday, July 25  in the afternoon we staged our show in front of about 30 people, most of them being DAAD-students. Thus DAAD-students performed for DAAD-students. We played a number of formats – e.g. scenes in which the audience could decide about the feelings of the characters: love, hatred, anger, passion, apathetic etc.  In another scene we continuously switched the language: German into English into mother tongue. Generally, about half the show was in English, half of it in German.

The cast included actors from Egypt, Kazakhstan, Bulgaria and Berlin-Zehlendorf…. And we do hope that we can carry on our impro activities, hoping that stage performances might get less difficult to be produced once the corona situation has been improved.