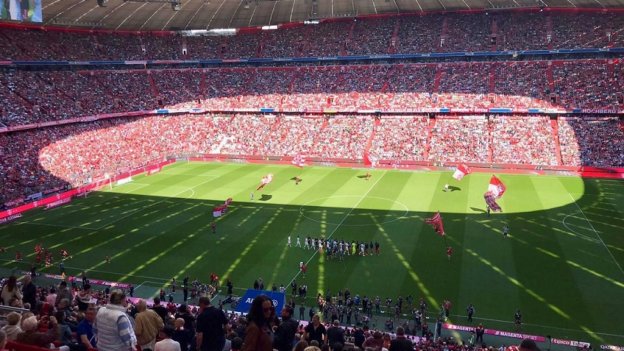 What makes the FC Bayern’s Allianz Arena one of the world’s finest football arenas? We will find out in the course of a one hour Arena Tour in English which takes us behind the scenes of this extraordinary stadium, which was created by famous architects Herzog and de Meuron and opened in 2005. It was the location of several games during the 2006 football world championship, and the 2012 UEFA Champions League finals took place here.

We will experience the atmosphere of the Allianz Arena from the point of view of a professional footballer in the players’ areas and discover the interesting details of this unique structure:

The day before our guided tour the Bundesliga match between FC Bayern and Werder Bremen will take place here. The photo above was taken at the last game between these two clubs last season.

Optionally it is possible to visit the FC Bayern Erlebniswelt at everybody’s own cost (admission for students 10 euros, regular 12 euros) after the guided tour.

Max 25 places, participants’ share is 6 euros. Registration starts once the invitation has been mailed.