With a small group of current and former DAAD scholarship holders, we’ve met near the juvenile prison Plötzensee in the north-west of Berlin. With our guide, Stefan Zollhauser (Berliner Spurensuche) we begun our exciting two-hour historic tour about mobility, sustainable energy, and urban green space. The weather was perfect, we were eager to ask questions, so that the conditions couldn’t be better. 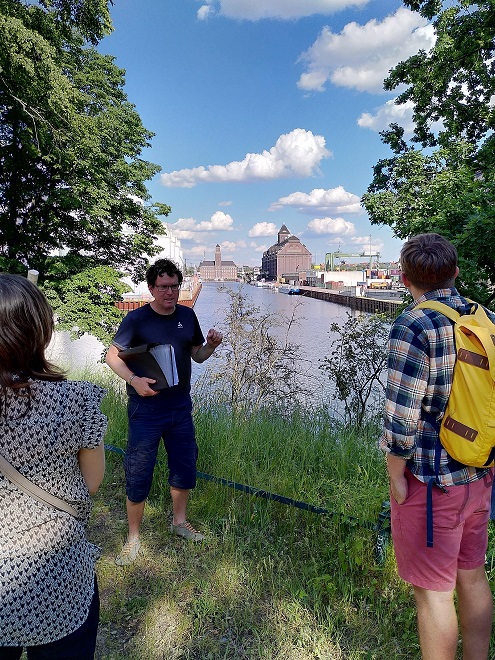 The excursion was organised chronologically. We’ve started in the last third of the 19th century with horse-buses and the first cyclists and we’ve ended in the 1970s and 1980s with the concept of the automotive city and protests against it. Stefan has illustrated each topic with old maps, photos, and caricatures from newspapers and magazines.

Although each period had its own specific topics of discussions and protests – pedestrians and horse riders being angry about bicycles, car drivers angry about carriages or cyclists angry about cars – they all had one thing in common. They all fought for their role in the public space. Regardless of who the actors were, it seems that everyone is always fighting to be treated fairly on the streets. What exactly fairly means and how to ensure that our own fair treatment doesn’t infringe the freedom of others, is the complicated bit.

We’ve had a lot of questions and we’ve received a lot of answers which lead to a lively discussion, but there were also a number of topics we couldn’t talk about for reasons of time. We’ll discuss, hopefully, at least some of them either in our talk series around the 17 Sustainable Development Goalsor in another guided tour.