In excellent summer weather, 20 scholarship holders of the Munich Regional Group undertook a trip to Murnau on Lake Staffelsee in June 2022 in order to acquaint ourselves with modern painting in the footsteps of Gabriele Münter and Wassily Kandinsky.

Murnau is a beautifully situated town in the “Blue Land”, the foothills of the Alps south of Munich, and was “discovered” in 1907 by the painter couples Gabriele Münter/Wassily Kandinsky and Marianne Werefkin/Alexey Jawlensky, who were friends and lived in Munich at the time . In 1909 Münter bought a modest little house with a garden here, which became the center of the artist group “Der Blaue Reiter”/The Blue Rider until the beginning of the First World War. Murnau was thus immortalized on the world map of expressionist painting.

After arriving at the train station, the group took a short walk through the center of the market town to the Castle Museum. In two separate tours through the early modern Murnau Castle with its winding rooms, the participants got to know important paintings by Münter and Kandinsky and learned about the biographical and art-historical background of the paintings by the two artists. Highlights of the guided tours were Gabriele Münter’s self-portrait from 1909, her reverse glass painting “Dorfstrasse im Winter” (1933) and her painting “Olympiastrasse” from 1936.

The culmination of the tour was a densely hung room with reverse glass paintings from five centuries and from all over the world, including pictures from Indonesia and Japan, which entered into an appealing dialogue with the reverse glass art of Münter and Kandinsky. 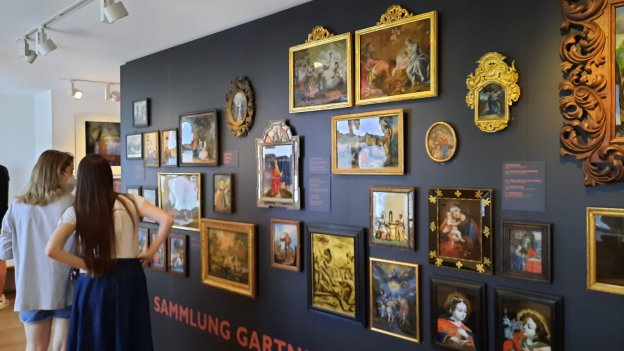 After the guided tours, the participants then had the opportunity to visit the permanent exhibitions on the writer Ödön von Horváth or on landscape painting from the 19th century.

After visiting the castle museum, the group went to lunch in the adjacent castle garden, 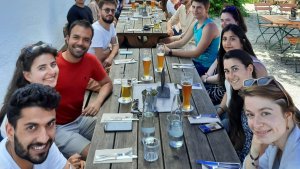 followed by a visit to Gabriele Münter’s house. Having arrived there after a short walk, the group explored the Münter House, which, based on photographs and paintings by Münter and Kandinsky, has been restored to its original state before the First World War and turned into a museum. 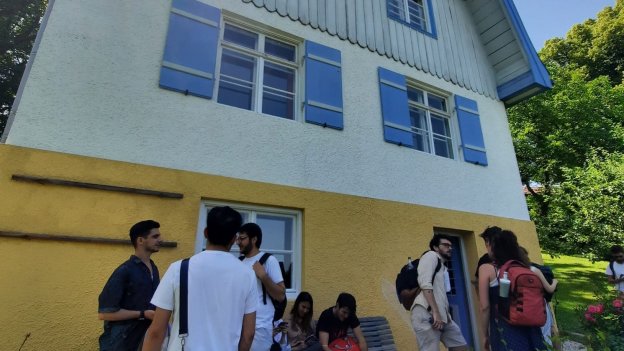 In addition to the staircase painted by Kandinsky and the furniture he designed, visitors could admire the dining area of ​​the house, which was reconstructed based on Münter’s painting “Kandinsky and Erma Bossi at the Table” (1912). 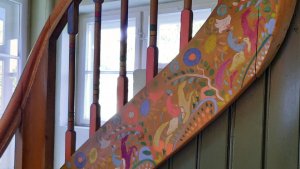 The colorful blooming garden with the roundabout created by Münter and Kandinsky then invited us to linger for a while.

On the way to Lake Staffelsee, the group finally passed the vantage point from which Gabriele Münter painted her view of Murnau, which the group had seen in the Castle Museum that morning. At the lake, the scholarship holders used the wonderfully sunny weather for a refreshing dip in the water or enjoyed an aperitif in good company before we traveled back individually to Munich in the evening.